Out of thin air – Oxygen from air separation for glass wool

At temperatures over 1000 °C and with oxygen support from air separation, glass candy floss is produced, which has excellent insulating properties.

The new air separation plant in Speyer extracts 260 tonnes of nitrogen and 130 tonnes of oxygen from the ambient air every day, plus 10 tonnes of the noble gas argon. The gases obtained are used in many production processes, such as in the manufacture of glass wool, which is used to insulate buildings. Important technical cogs in the gearbox of the plant are the Top Entry Valves from HEROSE. 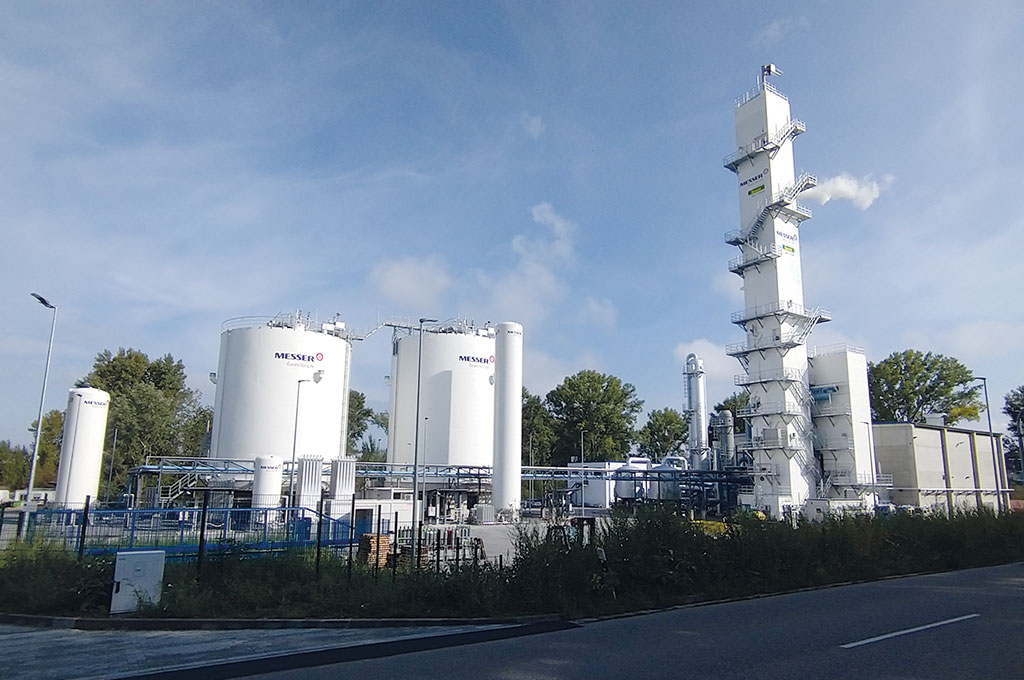 When the foundation stone for the air separation plant in Speyer was laid at the end of June 2019, this stone contained a time capsule containing a current daily newspaper. The news in it: tax evasion, mafia crimes and a heat record by the high, Ulla. How the world can change during the 16 months of construction:
Today, the pandemic determines the news situation almost daily and the ceremonial inauguration, the plant completed in October 2020 had to be cancelled – safety first. But the plant is firing up good news, for example because combustion processes run more efficiently and in a more environmentally friendly way with the help of the recovered gases.

Industrial gas specialist, Messer, has invested € 32 million in its third air separation plant in Germany. The plant was built directly on the premises of the customer, Saint-Gobain Isover, in the industrial
estate south of Speyer. This is indeed a win-win situation: Up to now, the Isover plant has been supplied with the necessary oxygen from Siegen by scores of tankers every day. This amounts to several hundred thousand truck kilometres per year – a considerable expense and a burden on the environment. Today, Isover is supplied with gaseous oxygen through a 250 metres long underground pipeline. A large proportion of the oxygen produced daily in Speyer is taken from Isover. In addition, other customers in south-western Germany are reached via shorter supply routes.

Air is a gas mixture consisting mainly of nitrogen (78 %), oxygen (21 %) and the noble gas argon (0.9 %). Due to their natural occurrence in the atmosphere, these gases are available in almost unlimited quantities. In the separation plant, the individual air components are separated from each other by gas distillation to obtain nitrogen, oxygen and argon in high-purity concentrations – liquid and gaseous. In many production processes, air gases are as important as water and electricity. Nitrogen is often used as a safety gas for explosion protection in chemical production and pharmaceuticals. Oxygen is used to make combustion processes more efficient and environmentally friendly because, compared to air combustion, no nitrogen oxides are emitted, and fuel is saved. The noble gas, argon, serves as a shielding gas during welding, plays a central role in stainless steel production and also in semiconductor manufacture.

“With direct supply, we minimise the logistics costs of transporting gases by road.”

Stefan Messer, Owner and CEO of the Messer Group 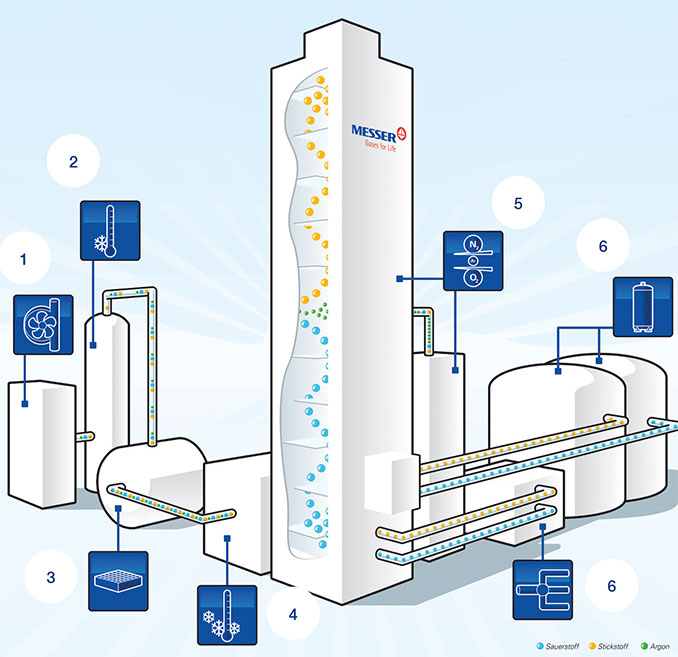 1 Compress air
Ambient air is sucked in, filtered and
compressed to 6 bar by a compressor.
2 Pre-cool air
Initially, the compressed air is pre-cooled with the help of water.
3 Clean air
Subsequently, the air is freed from disturbing components such as water vapour and carbon dioxide.
4 Cool air
The cleaned air is cooled down to about -175 °C in the main heat exchanger. Now the air can be separated in the real air separator, the separation column.
5 Separate air
During the separation process, the different boiling points of the air components are used: oxygen liquefies at -183 °C and nitrogen at -196 °C. Through the exchange between rising vapour and descending liquid, continuous evaporation and condensation at the top of the low-pressure column produces pure nitrogen and pure oxygen at the bottom. The argon is extrected by further separation columns and process steps.
6 Removal and storage
Gaseous oxygen and nitrogen are fed into a pipeline network and fed directly to the consumer. Oxygen, nitrogen and argon in liquid form are stored temporarily in storage tanks and transported via trailer to the consumer.

After passing through the furnace, the glassy melt is defibrated: a thin glass jet hits rapidly rotating defibration rings and is ejected from the ring through thousands of tiny holes. The resulting threads are defibrated by gas burners to produce even finer wool threads. The fibres are sprayed with small quantities of a binder dissolved in water. The binder is cured in a tunnel kiln at approx. 200 °C. Later, the glass wool is cut to the desired size and shape – in rolls, mats or sheets. Residues and sections of mineral wool are returned to the production process.

“The defibration process of the molten glass works in a similar way to the production of candyfloss: The finest threads are produced – the basis of glass wool.”

The air separation plant in Speyer uses, among others, the Top Entry Valve 01420 from HEROSE. Since the piping is inside the cold box, i.e. inside the insulated jacket, only the handwheels or actuators are outside. The valve internals must therefore be removable from the outside even when installed. This is where the Top Entry Valve 01420 shows its strengths: It enables maintenance work to be carried out on the cone or upper part without having to damage the insulation because the topwork screws are outside the insulation. This construction method offers great potential for saving material, costs and time. Further HEROSE cryogenic globe valves are used for the control of material flows in tank storage. In addition, HEROSE safety valves are installed in the plant for protection against overpressure.