NextHydrogen is the energy carrier of the future
Cryo air gases

The engine that is coming out of the cold

Three. Two. One. Ignition! At the German Aerospace Centre (DLR) in Lampoldshausen, engineer Gerd Brümmer is conducting tests on the current sample at a safe distance. The sample is a component engine that goes by the resounding name Prometheus. The engine will be the seventh generation of the Ariane rocket system that will be sent into space at the end of the 2020s. Here in the P8 test stand components which must manufactured more quickly and under more favourable conditions will be tested on a scaled down version – the technology corresponds to that used in the later big engine.

As little heat input as possible – the fuel must remain liquid

Cryogenically liquified methane flows at the test bed from vacuum-insulated pipes at -161.5 °C and cryogenicically liquefied oxygen flows at -183 °C directly into the engine. Here is the fuel compressed in the engine pump and is fed through the nozzles of the injection head into the combustion chamber. This results in a whitish to orange-coloured combustion and any amount of data. The test bed computer monitors the test run and records the results.

Space travel is now very reliable – a rocket launch is only noticeable if something is not working properly.
Gerd Brümmer, head of the P8 test bed

The big red emergency button is not used – all components are tested in advance for minor leaks and hairline cracks. The vacuum-insulated pipes guarantee a low heat input into the cryogenically liquified gases. It is important to avoid evaporation because at the end of the pipe there is a component that could be damaged if boiling water is present there. 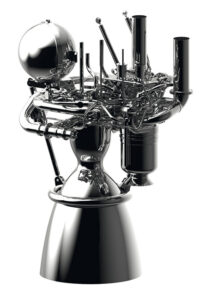 In Greek mythology, Prometheus is the fire bringer – impressively the reason for this allusion to the Greek God is seen and heard here on the test bed . A car engine with a capacity of 2 litres has develops perhaps 200 HP – whilst a rocket engine with combustion chamber capacity of 2 litres develops around 30,000 to 40,000 HP. If something unexpected happens at this output it is no longer to adjust to the right. This is why the research and technology test bed in Lampoldshausen is so important for European aerospace. On 60 to 70 test days a year at least two hot runs take place each day and data and knowledge are collected as a basis for further developments. The test capacities will be mostly utilised for the Ariane programme. Also the flight inspections of finished engines can be found on the premises in Lampoldshausen. After successful test runs they go to French Guiana to the space centre in Kourou and are installed in the rockets. About 6 Ariane missions per year, communication and research satellites are sent into space.

A turning point in design and technology

Competition in space transportation is growing and pressure on prices and development is increasing. Die DLR-Raumfahrtforschung setzt deshalb auf neue Konzepte, neue Treibstoffe und neue Produktionstechniken. A new third test cell has been installed on the P8 for researching complete rocket engines, including turbo pumps. The first engine manufactured fully in ALM technology (Additive Layer Manufacturing) is running here. The 3D printer with metal powder shortens the production time and will reduce the costs to 20 % compared with a conventionally produced hydrogen/oxygen engine.

Our test specimen needs the fuels cryogenic, without gas bubbles, therefore we are dependent on vacuum-insulated pipelines.
Gerd Brümmer, head of the P8 test bed

Although the ALM printed methane engine has lower power, it will be reusable in the future. There are concepts in the planning which allow vertical landing of the rockets. With every attempt on the DLR test beds in Lampoldshausen, the technicians gain new knowledge for the future of European space travel.

In order to avoid heat loss, HEROSE is also investing in the expansion of vacuum insulated pipelines. New vacuum pipelines have been installed for the nitrogen feed by a specialist company in the test bed of the development department and quality assurance departments in Bad Oldesloe. As a specialist in valves and fittings for cryogenic applications, HEROSE requires the product test facilities for new developments. One of these developments, which recently reached series production, is the FullX valve for vacuum-insulated pipings. 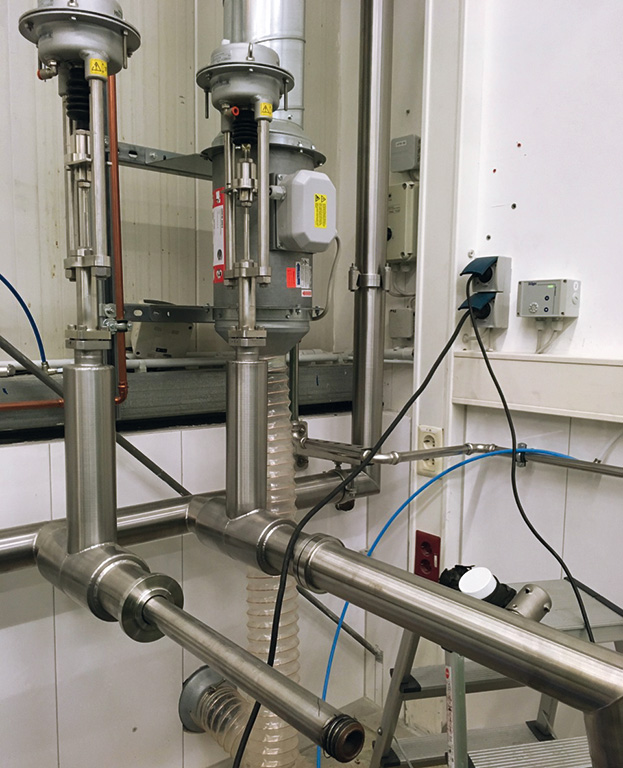 The product is designed for demanding applications down to -269 °C – as at DLR or in shipping – but is yet to be used for the first time in a customer application. The FullX valve has a lot to offer: it prevents heat input because the vacuum insulation can be fitted around the valve, it allows maintenance without vacuum losses and the modular structure allows adaptation to individual requirements. 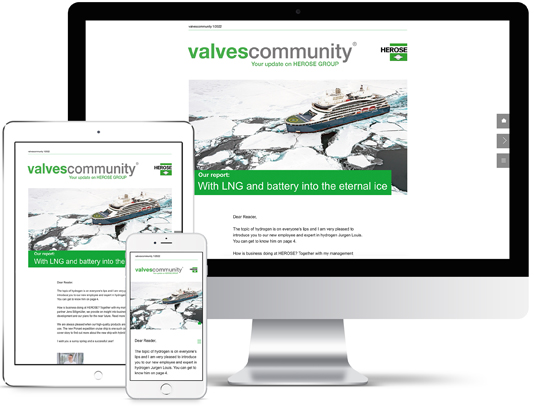