NextHybrid drive: with LNG and battery into the eternal ice
Cryo air gases

Dairy cow on ice – High-tech in the cowshed

State-of-the-art reproduction methods are used to ensure optimal cattle offspring. Cattle semen from the best bulls is transported internationally to customers with the help of liquid nitrogen. To ensure this is successful, two things are needed: a lot of know-how in bovine genetics and the technical requirements to ensure the cryogenic cold chain. Alta Genetics operates the largest cattle semen bank in the world and HEROSE supplies safety valves and shut-off valves for the necessary nitrogen containers.

In a modern cowshed, high-tech is not a foreign word – agriculture is also going digital and using modern software solutions. Milk production is the most important branch of German agriculture, and with 4.2 million cows, Germany is also the largest milk producer in the EU. In the 1990s, the method developed more and more in the direction of artificial insemination, and since then the direct approach with a classic stud bull has been used less and less – certainly on the larger farms.

The path of the cattle semen begins, of course, with the bulls. A stud bull weighs a good tonne, so its weight alone is a risk factor for the cattle to be inseminated. The main argument in favour of artificial insemination is the avoidance of mating diseases, because hygiene is very important. Another advantage is the comprehensive control and evaluation, as the exact insemination and conception date are known and thus the calving date can be managed. The bulls are semened two to three times a week. The semen is then examined and only if it is of good quality, about 200 to 300 semen portions with about 20 million sperm cells each are obtained from it. 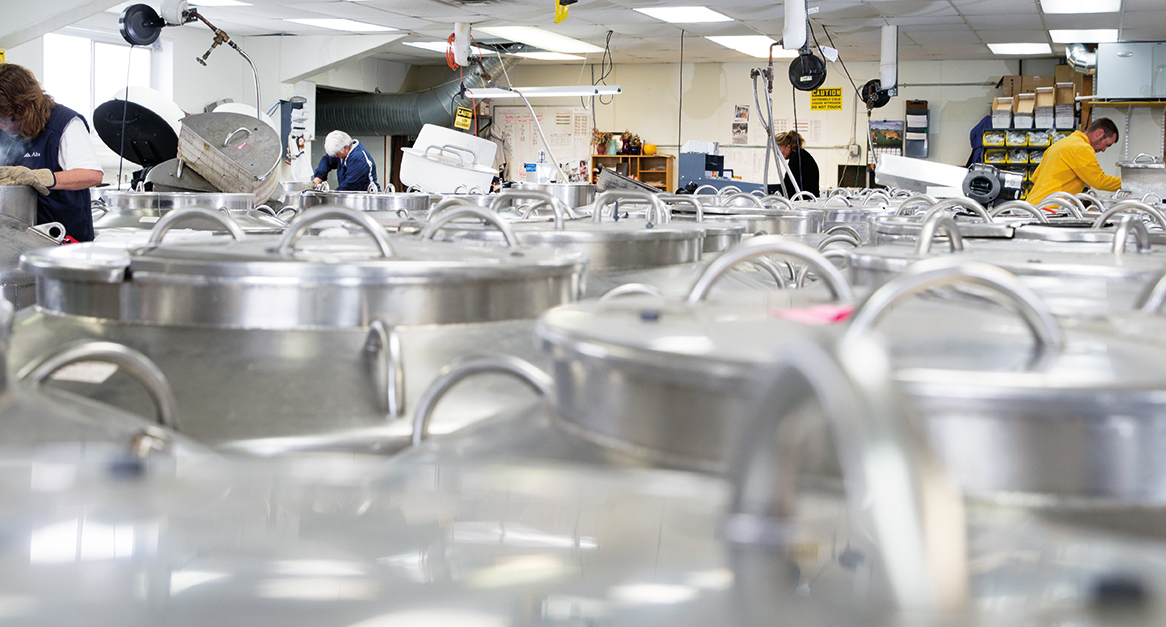 The portions of cattle semen have to be quarantined for 6 to 8 weeks before the flight to Europe. The central transfer site for Europe is in Kleine Huisjes in the Netherlands, where the large refrigerated containers arrive.

A portion is filled into a so-called sequin, which are small plastic tubes that are then slowly cooled down and stored in liquid nitrogen at minus 196° Celsius, thus preserving them indefinitely. The approximately 300 breeding bulls from which Alta Genetics offers semen in Germany are mainly located in Canada and the USA. Therefore, the portions have to be quarantined for 8 weeks before flying to Europe. The company‘s transhipment point in Europe is Kleine Huisjes in the Netherlands – this is where the goods arrive and are stored until they are further distributed throughout Europe in smaller containers of liquid nitrogen. The pressure-free stainless steel containers are vacuum-insulated and specially developed for low-temperature use; with sufficient liquid nitrogen, they remain cryogenically cold for weeks and can hold several hundred sequins.

Liquid Cylinder Valves for small and medium nitrogen tanks – Type 01950
This small globe valve is ideal for liquid cylinders and micro bulks. It offers easy maintenance, safe operation and a compact design. Thanks to the special shape of the handwheel, effortless operation is ensured even when wearing safety equipment. The valve is now also available with medium and long upper part extensions 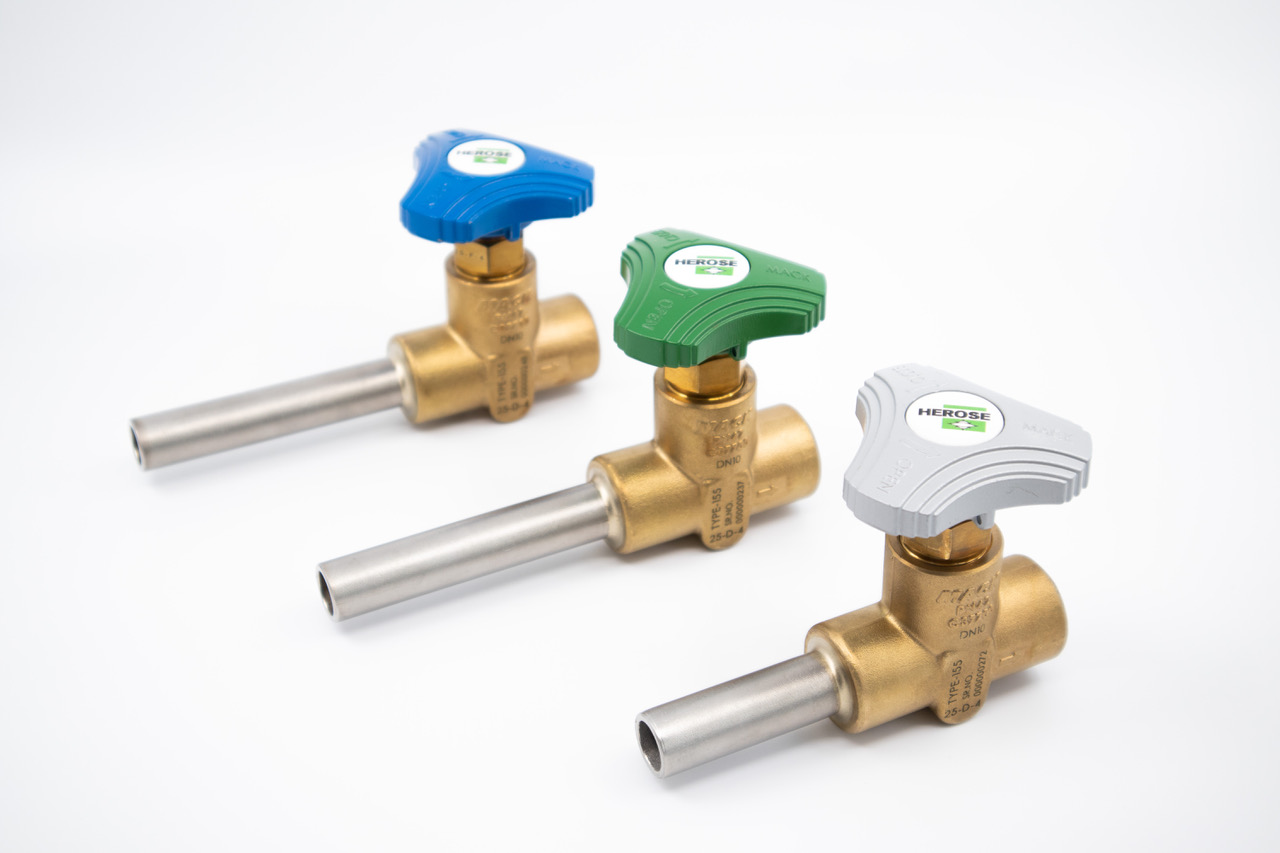 The sperm is repacked into smaller containers at the German Sperm Depot in Uelzen – naturally under a cryogenic atmosphere in liquid nitrogen, so that the sensitive cargo does not suffer any damage. Nitrogen is regularly refilled from storage tanks equipped with HEROSE safety valves and shut-off valves. The farmer selects the suitable cattle semen according to individual goals and requirements. Important parameters are the performance – milk yield and ingredients –, the health and the external appearance of the animal. The detailed breeding value estimates provide information on this. For the many dairy farms, the focus is on a production cow that is healthy, long-lived and produces the desired results.

Dairy farmers are mostly looking for female cows to be used to increase the herd with their own offspring. In order to achieve this goal, so-called sexed semen is also used: Here, X and Y chromosomes are separated and thus the desired sex of the offspring can be achieved with over 90 percent probability. There are different qualities of cattle semen: In general, it can be said that the younger bulls have very good genetics, but do not yet produce as much semen. The demand is high, but the supply is limited – this determines the price.

Since 2009 there has been genomic breeding value estimation – through genome analysis you can see very accurately whether an animal will be a good breeding bull.

From deep frozen to body-warm in 12 seconds

When the semen is delivered to the farmers, it is then repacked into the farm‘s container – this all has to happen very quickly so that the cold chain is not interrupted. To ensure sufficient fill levels at all times, the delivery trailer from Alta Germany has a nitrogen tank from which it is refilled as needed. The sequins are packed in portions of 10 or 25 – there is a sperm index for each container as well as coloured sticks for marking to keep the different bulls separate.

The individual sequin is thawed in a special container directly before insemination: The sperm portion is thawed for 12 seconds in a 38 degree water bath. Now the sequin is cut open and put into the insemination gun. This is then placed in the so-called gunwarmer, a heating device, so that no cooling takes place on the way to the cow. The cattle semen should be inseminated within 15 minutes – usually three cows can be inseminated in this time, a very experienced inseminator can do up to five cows.

Animals that perform well and are otherwise inconspicuous are popular – i.e. they are healthy and do not need a visit to the vet. It is not only natural heredity and nature that are responsible for the animals‘ well-being – the environmental factors, i.e. the stall, the management and the feed, have a major influence. New stalls are open, with plenty of light and air and offer the animals good opportunities for movement and rest. If the general conditions are good, then you can also see the genetic differences better.

The structural change in agriculture leads to larger farms with 300 to 500 animals – there are also those with 1000 to 2000 animals. The larger the farm, the more modern the husbandry methods and the more important herd planning becomes. For farmers, there is more relief by employees at these sizes. Behind every litre of milk in the supermarket there is a lot of work, a lot of planning and technical effort.

Every day, the bulls need in excess of 16 tonnes of feed. From about 60,000 semen collections annually, more than 34.5 million sequins are produced and shipped worldwide. Alta Deutschland in Uelzen specialises mainly in dairy cattle, but also has classic beef breeds on offer.