Air gases are often produced where they are used – but a large proportion has to be transported. In the process, the rare noble gases usually travel further than the three more common atmospheric components. Recently, however, much has changed: The pandemic has shifted supply chains and led to increasing demand. The HOYER Group operates a fleet of over 40,000 tank containers worldwide. HEROSE valves and fittings are also installed on the cryogenic containers for the transport of liquid gas.

Tank containers with cryogenic oxygen bring the life-saving gas to places around the world where, in pandemic times, it is urgently needed.

The demand for medical oxygen has increased so much in the pandemic that additional transports in tank containers have become necessary to supply Covid 19 patients with the life-saving gas. After the USA and India, Brazil is the country most affected in purely numerical terms. In some Latin American countries, hospitals are overburdened, and patients‘ relatives are trying to find the life-saving oxygen every day. People often queue for a long time to have their privately purchased ten-cubic-metre cylinder refilled. Although there are also numerous air separation plants in Brazil, most of them are located in the south and south-east of the country.

The Amazon is on its last legs

In spring 2021, the Amazon region was hit with force by the second wave. There was no more oxygen in the hospitals and in mid-January desperate people demonstrated in front of the largest hospital in Manaus: “Oxygen! We want oxygen!” Amazonas is the largest of the 26 Brazilian states – it is four and a half times the size of Germany – intensive care units are only found in the capital Manaus. Logistics are a big challenge here: the aid organisation, Doctors Without Borders, supported smaller rural hospitals and the Catholic Church sent hospital ships into the jungle. The transport of vital oxygen can only be done with special equipment, HOYER sent 30 to 40 tank containers to South America within a few weeks. “We have never had such a large increase in the demand for cryo-equipment in such a short time before,” says Carina Meyer, who is responsible for gas container rental.

HOYER pulled out all the stops for this priority shipment of medical oxygen due to the humanitarian situation in the Amazon region. Thus, the freight purchasing department was successful in organising a ship slot within ten days – despite the tense situation with regard to sea freight capacities. Within two weeks, the loading and entire shipment from the USA to the port of destination in Brazil was  completed. The transhipment in Central America was also successful. The tracking data of the Smart Containers were constantly monitored, so that it was not possible for the shipment to accidentally end up in a corner of the port. In this way, good logistics were able to successfully cover the supply deficit caused by the greatly increased consumption.

The rarer and more valuable a gas is, the more it is transported globally. Helium is a good example that is transported around the globe for research and use in medical devices. Much more regional is food-grade CO2, which is used in many beverages, such as mineral water and soft drinks, and in the dispensing of beer. More is drunk during the summer months, which is why twice as much tank container capacity is needed for CO2 transports throughout Europe during the season. Carbon dioxide is also used to make dry ice, which is needed for transporting fish, for example – from trawlers to fish stalls. Dry ice is also very important, for example, to transport the Biontech vaccine well cooled to the vaccination centres and doctors, so that soon an excessive amount of medical oxygen will no longer be needed, and the world can wave the pandemic goodbye.

Smart containers give us the ability to track logistics chains without interruption and, if necessary, intervene just-in-time.”

Throughout the world in 30 days

Under ideal conditions, a vacuum-insulated cryo-container is able to keep the transported product cold for approx. 30 days. This corresponds to the usual international transport routes. It is best to keep the containers in motion at all times, because then the surge movements ensure that the cold is distributed and that no warm gas bubbles form on the surface. Safety is always the first issue in air gas transport, so the quality of the container equipment is also an important basis for safe transport. 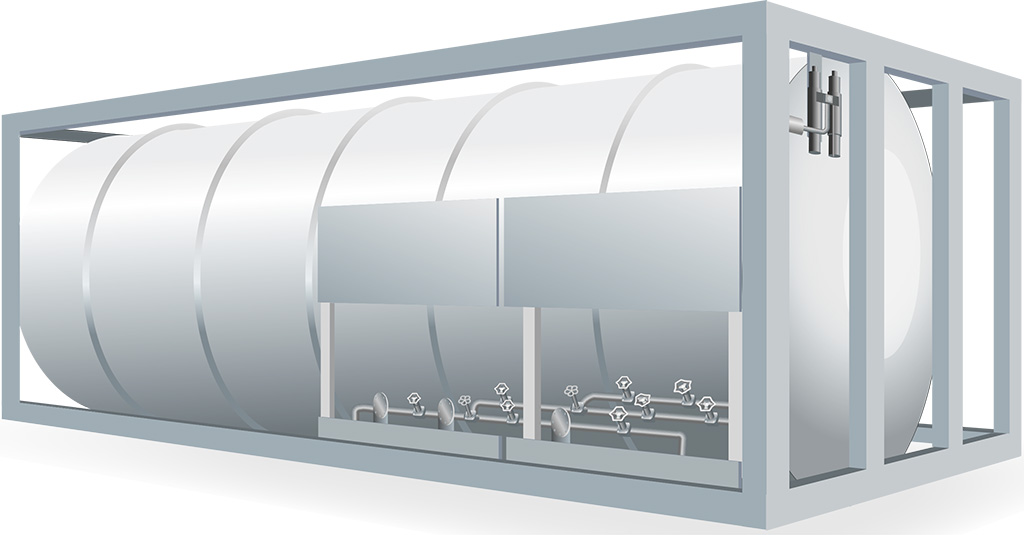 ISO tank containers are used for the regional and worldwide transport of cryogenically liquefied gases. Their external dimensions correspond to standard 20- and 40-foot containers. HEROSE gate valves, globe and safety valves as well as divertor valves are used for the technical equipment of the tank containers. Thus, these products contribute to loading and unloading and the safe transport of cryogenic air gases.